Moving on with Brownie

Firstly having used a film in the brownie, I realised that I had to do something about keeping the camera absolutely still.  A friend kindly made a small platform that I can attach to my tripod. It's just a small piece of wood that sits on top of the tripod with a split level to make sure the camera is straight.
A few weeks have passed since I had a go with the camera.  I am waiting on film being delivered simply I love to work with colour then convert it to B&W on the computer as that way you can be flexible with the final results.
I am very excited about working with the brownie to produce something different.  To be honest at this moment in time I'm not quite sure what I will produce, I guess the camera will say it all within the images.
Just yesterday I received a wonderful surprise it touched my heart deeply the thoughtfulness and kindnesses of what this person did will stay with me forever they have no idea what they did it's beyond words.  It was a belated birthday gift.
The surprise was these two wonderful brownies below. 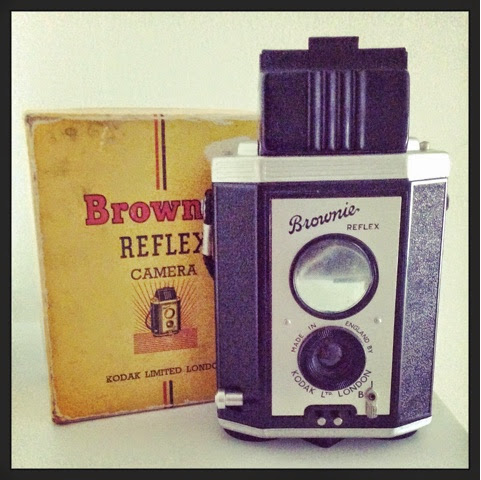 Having now researched the Reflex Brownie simply it's a beautiful camera to hold mint condition as well.  As I tried to look for the viewfinder I didn't realise that the top of it opens up like a Hasselblad it just pops up.  And as I looked through just beautiful, below is a snapshot that I took with my iPhone as I was just excited and wanted to see what I could do with the camera. I'm looking down into the camera in which the mirror reflexes the image.   With most old cameras you can't help but notice everything is back to front or the other way round. 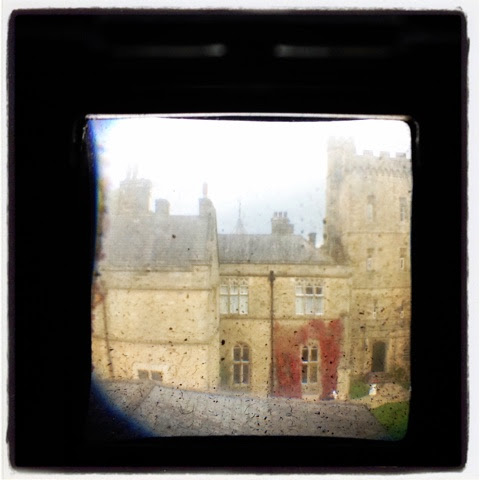 Makes one wonder what the results will be from an actual film as I love the flecks that are on the lens it kind of gives a vintage feel to what you see. The film format is a 127mm which is a compact medium format which I'd probably call it the 'Baby' that is found within the medium format range of films.  However the 127mm is very rare to purchase I found a company online who produce them in B&W only.  These cameras are what one would call 'classic' and sometimes one might need to hack a film to make it fit the camera as the chosen film formats are no longer being produced.
However I have been researching and found that some people use 35mm in this camera but I'm not fully sure, I guess I'd have to give it a go and see if this is workable.
Also I saw on Google+ a company who wants to see '100 more years of Analog Film' they are looking for support, I feel this is a must as I don't want to see film disappear totally.
One of the main reasons I went 'Digital' was due to the degree I undertook.  I was anti-digital ever since it surfaced.  I love film and didn't want to change my methods within the world of imagery.
So using these cameras take me back to the beginning again and I'm just excited to see what I can produce.  I have never owned a Brownie until recently so this is all new but to go back to film is something I like very much.  I could go on and on about why I like film but I don't want to bore you.  I guess we all have a choice as to what we do and don't like within the feild of photography today. 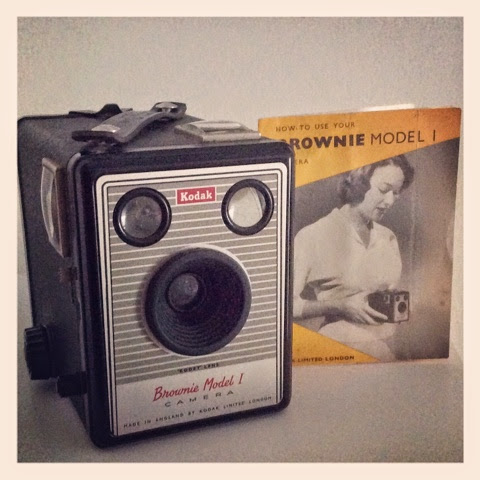 Moving on to the Brownie Model 1 camera also mint condition and ohhhhh I do love it.  Having now handled this camera and referred it with the other brownie I've noticed that the wind on key doesn't turn the other way, hence my error with experimenting with the first brownie.
I will be using 120mm film with this as having done previously.
So watch for upcoming photos and more posts.