Last week I went over to Liverpool to visit 59 Rodney Street which was Edward & Margaret Hardmans home and studio.  It was exciting to think of walking back into the 1950's era as the house was kept in that decade from when the Hardmans lived there.
I approached the door numbered 59 it was very grand and well preserved. 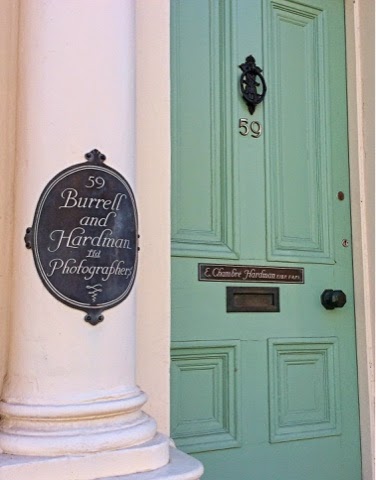 To enter Mr Hardmans home and studio one must go round the back of the house as it is run by the National Trust, as you go towards the entrance on the other side it's like a little office with some of his work on display along with post cards etc.  I booked my place on the 11am tour and apparently was the only one on that tour which was ideal really as I wanted to take some photos as had permission to do so.
In order to get to the entrance of the house one walks past a little garden which is quite unique in its own way yet beautiful and well kept.  Upon entering the Hardmans house one beings to walk through a few small rooms.
The first room was what they call the changing room in which you view a video about Mr Hardman's life and work.  This is the room where people would prepare themselves for the photographs, in the corner of the room their is a mirror where one could view themselves prior to being photographed. 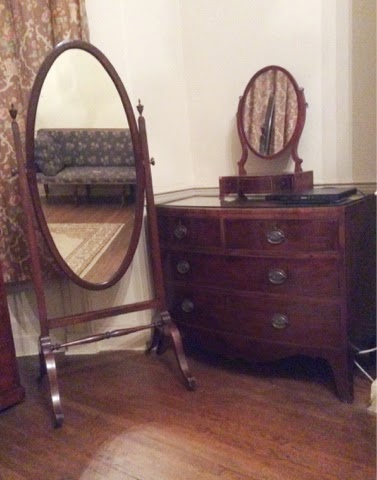 As I sat and listened to the introductory video it was good but am glad that beforehand  I had researched Hardman's work otherwise I wouldn't have had a clue due to my hearing loss it can be hard at times when listening to audio when you don't see the person as I lip read.
The next room was the Waiting Room this room was very grand and furnished well as one could see or feel how successful the business was from entering this room.  It gave the first impression of the business as having just left the changing room, you could view samples of Hardman's work, mounts frames etc. 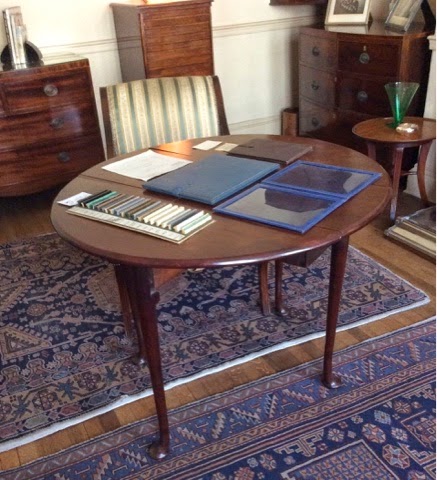 We then walked up a short flight of stairs to the Studio which was where the clients would come to have their photo taken.  In this room there were quite a number of props and you could see the items he used for children as well as the adults from tea sets to small chairs and quite a number of small toys were kept on a table outside I guess to maybe keep the children occupied while getting ready for photographing them.  I saw quite a few old cameras which were the very cameras that Hardman used to photograph the clients.
Also in this room their is a little stage where the clients would sit to pose for a photograph. 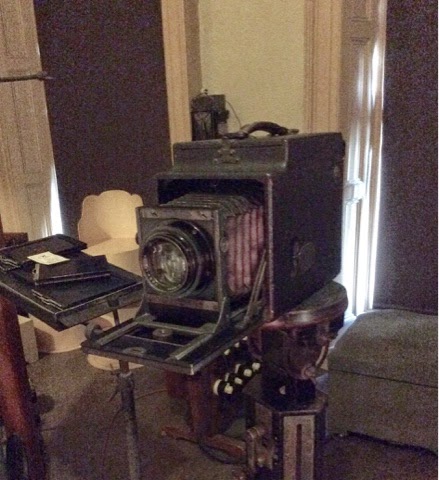 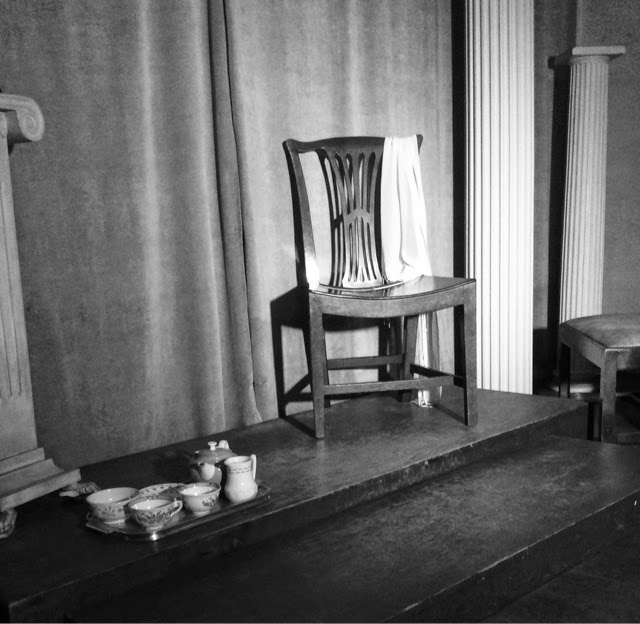 We then went onto view the darkroom, it was interesting to see how he developed his photographs, being a photographer myself and having developed some of my own photos it was somewhat natural to view such a room as I'm familiar with the process of developing.
We passed by the bathroom.... The next room was what is called the 'Exhibition room' where original photos are on display.  It was amazing to see some of his portrait photos alongside some of his landscape / Liverpool photos as well.  One could only admire his work.  I took a few photos in this room as had to as it just inspired me. 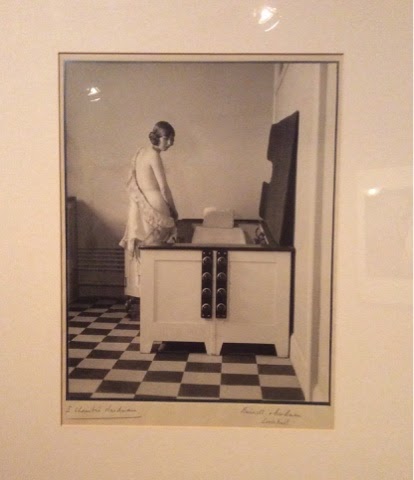 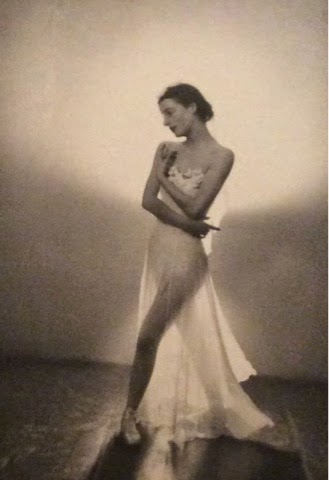 We quickly move to the next room which took me to the living quarters, it was strange to see that they lived in such a small space after walking through this house yet they chose to live in such small rooms. I can imagine when setting up a business such as one has to compromise and give the best to the business.  Here are a few photos of they're living quarters.  You'll be able to see which room is which from the photos. 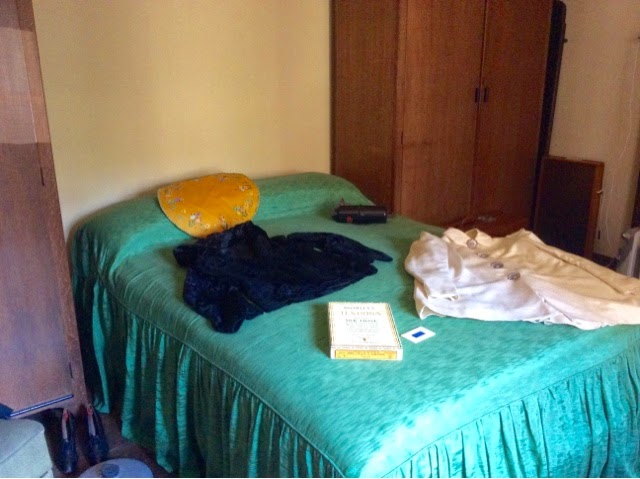 They often sat listening to the radio and notice Mr Hardmans hat on top of the radio. 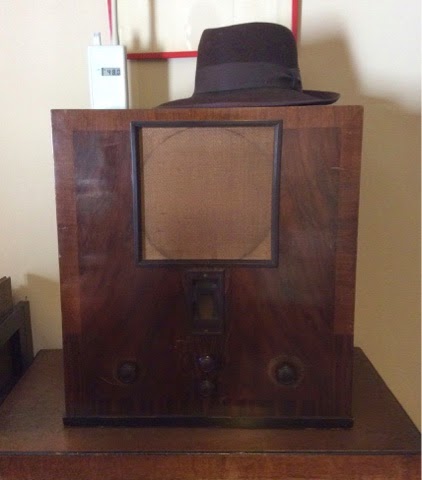 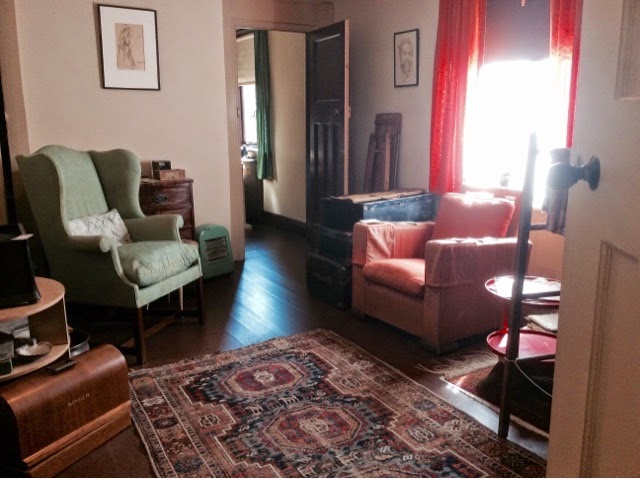 The Kitchen with many small cupboards...and dishes. 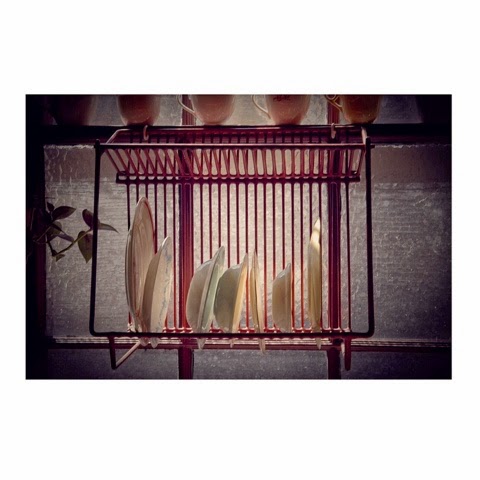 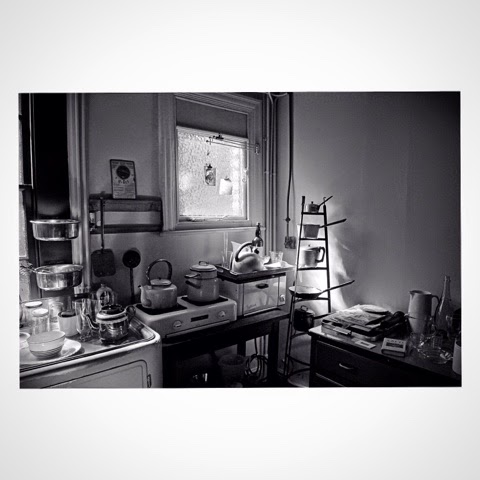 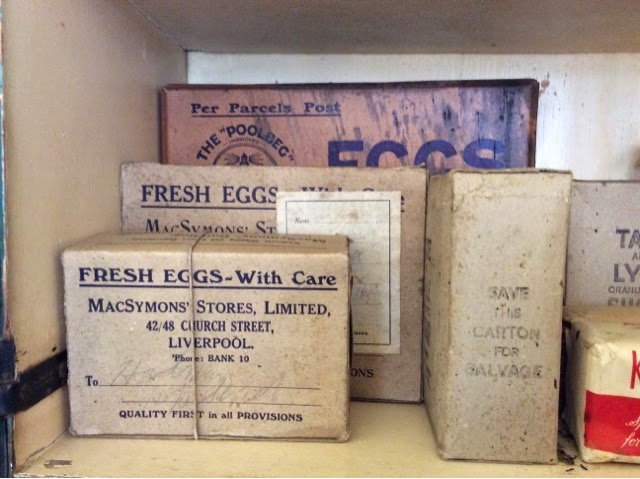 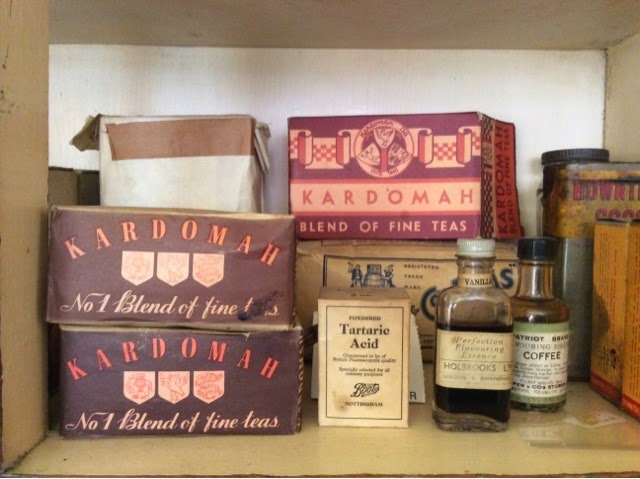 One could see Margaret's teeth on a shelf! 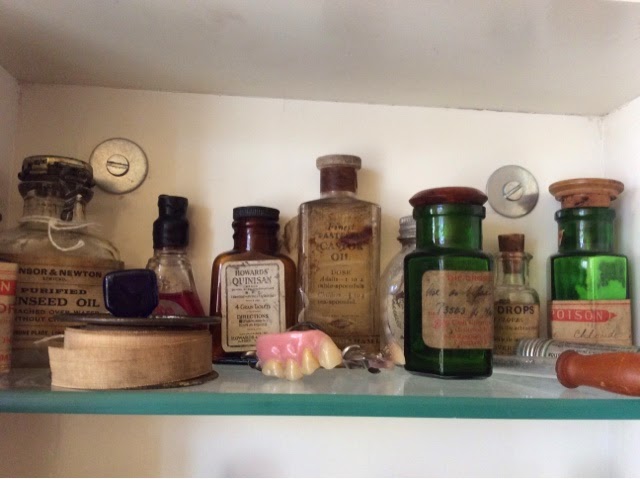 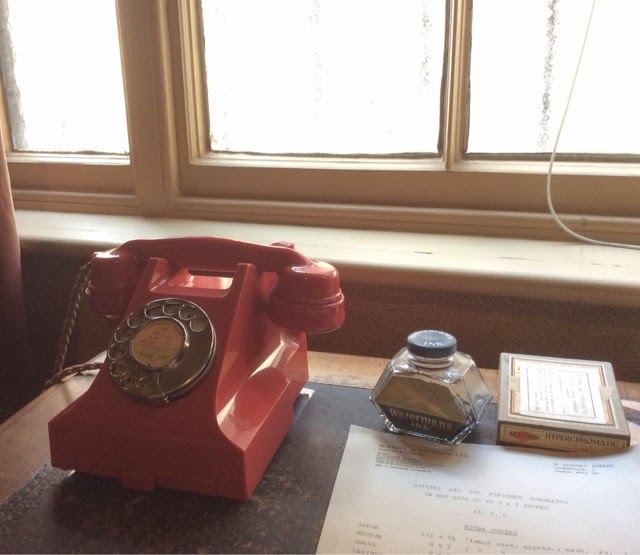 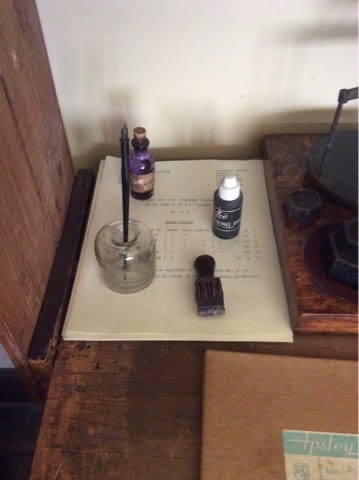 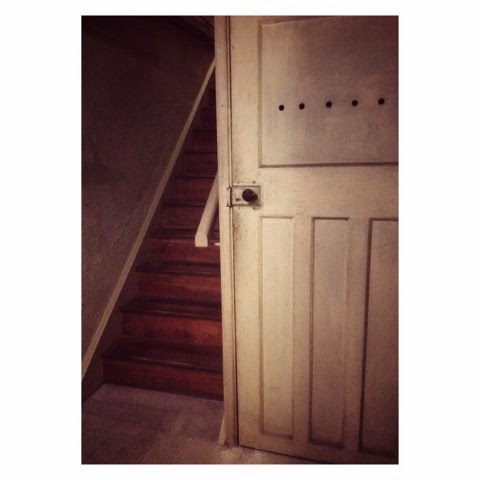 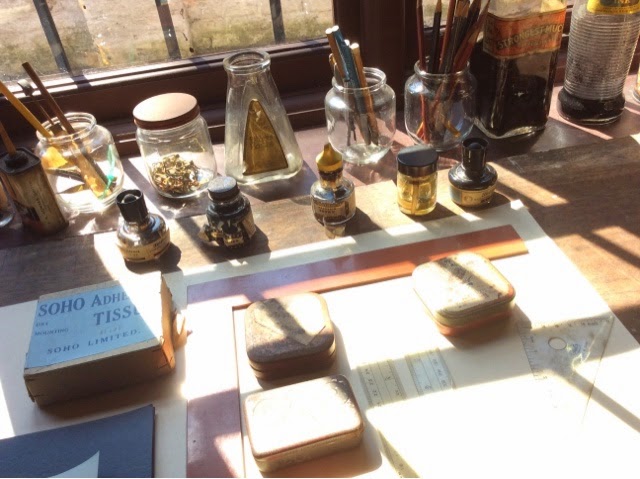 Edward and Margaret often cycled to Liverpool Lime Street Station to catch the train for further travels to take what was known as their passion 'Landscape photos'.  Here are the bikes they used.... 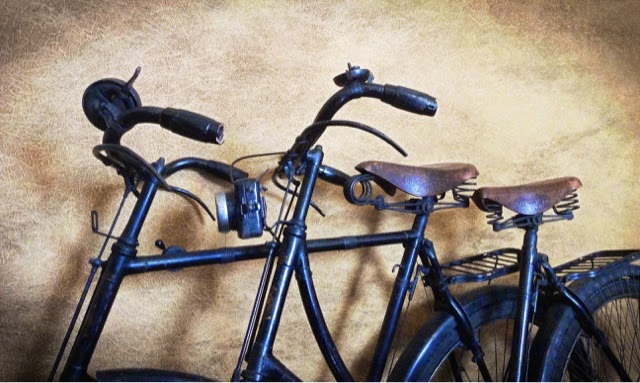 It was somewhat an insight into their lives before I begin a journey of re-capturing some of Hardmans work which will basically be Landscapes and the city of Liverpool...
My first stop will be looking towards where the Ark Royal first stood when Hardman photographed it in the 1950's. 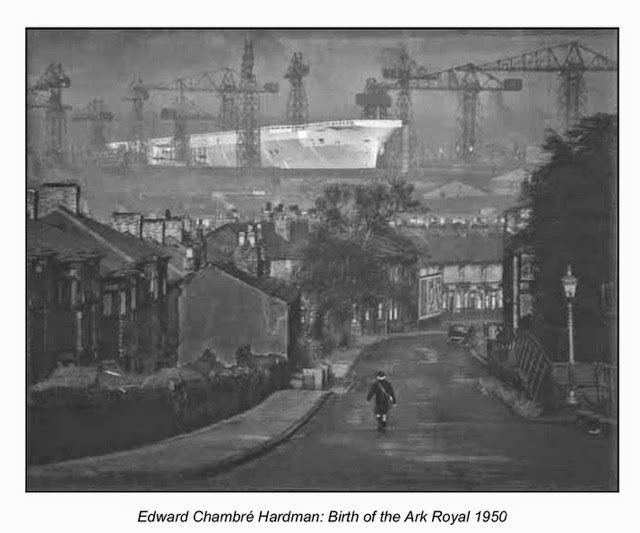 And so my journey continues......
I have to say I'm somewhat curious to see just what I will produce as a result of walking in Hardmans footsteps over the coming months I do not know what I will capture but one can only try their best and I aim to produce my best work as a result with my Reflex Brownie Camera.
More blogs to follow....
at April 26, 2015