A few weeks ago I finally took a trip down to Ludlow Castle which was somewhat a long journey 7 hours round trip dare I say.  It was a beautiful trip in itself.  The weather kept changing as I got nearer from dull weather to sunshine then to dark clouds in the distance, I honestly didn't know what to expect so was hoped for the best.
Excitement was bubbling up inside me because I could only relate to the photo I saw of Hardmans of the Castle, and from that it looked beautiful although taken many years ago.
While I did research on this particular image that Hardman took I noticed quite a number of issues, well that's one way to put it.  And I wondered what was the best way to approach these issues in the best way possible to avoid conflict.  Many thoughts ran through my head.
However as I got nearer to the town of Ludlow all those thoughts ran out of my head as simply one couldn't wait to walk in his footsteps and see the changes from then till now a mere 60 years later...
The minute I arrived at Ludlow the heavens opened and a huge downpour of rain, I'm not joking it was throwing it down I had to shelter under a tree....with all my camera gear thankfully I hadn't got the cameras out.
Then I began to dodge the rain as I wanted to get through the town to the castle, within a matter of ten minutes I stood at the entrance of the Castle immediately I knew this was a special place.  It was just beautiful.
It continued to rain I went to the cafe inside the castle and got some green tea and I began to think how was I going to capture this in the rain, deep inside I wanted the rain to stop soon as I'd traveled such a long way.  The waiter chatted with me and I politely asked if he could tell me if the rain would stop, he went to enquire, then returned and said it should stop that afternoon so I began to plan more and with the hope I could stand at the very same spot where Hardman stood all those years ago.
So after sitting for about 45mins the rain didn't give up but it became more like drizzle so I decided to make a go of it.  The walk was just five mins downhill to the other side of the bridge.
When I got there it was just breathtaking as the castle is set on top of a steep rockface with the river Teme flowing below it, I'm being honest it was beautiful and one could understand why Hardman photographed it in the first place.  I had to walk around quite a bit to find the same spot where Hardman once stood, it was overgrown with bushes so I had to do with what was the nearest.
I looked around at the scene before me and yes they're were lots of changes in the growth of the foliage in front of me, you will see when you compare the photos.
After getting everything set up the rain started again so I sheltered under some trees...I waited and waited.  About ten mins passed and it stopped so I got everything set up again and began to shoot my images.
The Bridge over the River Teme was Hardmans main focus of the composition and was reflected on the river whereas the Castle fades into the background surrounded by trees...so I aimed to do the same not sure if I'd get the bridge reflected on the river...
The photo below is used by the kind permission of The Hardman's Trust. 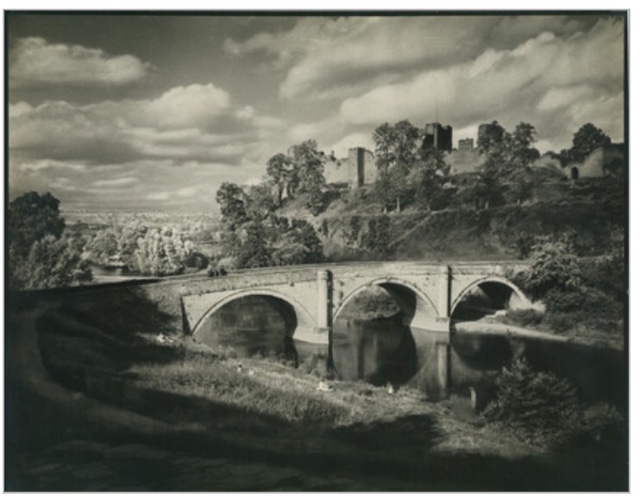 ©Edward Chambre Hardman
Hardman did extensive retouching to this particular image - above the right hand side of the bridge where a row of houses have been taken out making the scene seem timeless.  Hardman wrote of the finished image,
"one might be back hundreds of years, no Pythons, no telephone wires, no obvious tourists".
As I stood and looked at what was before me and compared Hardmans image to today I could see where changes had taken place since then and now....not a huge amount but enough growth in the landscape was noticed.  And maybe a few more houses as well.  As I looked and pondered the thought that Hardman wanted the photo to look timeless but to me it did that very day I stood on the banks looking down towards the river yet looking up towards the castle...  I couldn't understand really the whys and how he chose to remove the houses.
Seeing Hardman did manipulate the image the one question I had was so do I do the same it played on my mind a lot that day and I didn't have an answer.  I was just to captivated with what I saw before me, and I wanted to capture what I was seeing with the Brownie Reflex Camera.
I took several shots and moved around quite a bit but kept my main focus on the bridge with the castle in the background... It was just so unreal to be standing there where Hardman stood and to see and feel from deep within in some way the joy he might have had upon discovering this beautiful piece of History yes I want to call it History as that's what it is...
After taking the photos I was so curious that i took a tour inside to discover more for myself, I wished I could have imagined it in its full glory as today it's just the shell of its former self but worth the trip oh yes and I'd gladly go again.  I could write about the history of the castle but my blog isn't about that it's about walking in Hardmans footsteps to talk about the changes from when he took the photos to how I see the changes from then till now.
As I traveled home those questions resurfaced again why did he change the photo?  Was it necessary? As when I was doing my degree we were taught only to change the photo if needed but we were encouraged to keep them pure as close to the truth as possible.  Just small adjustments on the curves or to lighten it up...or to remove dust marks.   They taught us well at Blackpool dare I say.
A few weeks have passed now since that trip and my films came back from the developer and again I thought what do I do...I asked a friend and he simply told me don't manipulate the photo keep it pure as you are talking about the changes from then till today, it was like he reigned me in as that's what I'm doing...so in my part NO photo manipulation has taken place.
He also told me about a big debate going on about photo manipulation and why it is wrong...I have to say I do agree it's wrong as we all want to see the truth in what we see.
"If we lie with our work what's the point"?
"What's the point of showing our work and getting credit for it if it's not the truth".
It is a difficult one really... When we look at the media around us from day to day do we really see the truth? Or is it covered up?  While I was doing my degree were taught in critical studies to learn to read into an image to try and tell the story that was in front of us to take it apart and make sense of it.  Sometimes we could do it but sometimes if we missed even the tiniest detail it could throw us off track.  What I'm trying to say is we need to see the images as the true story the truth and nothing else. And if something is taken away it might make us miss-read the whole scene, the story within the image.
I guess we all can decide for ourselves what the rights and wrongs are of covering up images but as professionals what is really the right way forward?  I will enclose the links below to this particular debate as I feel every photographer needs to be aware...of the hidden truths...
Let's get back to Ludlow Castle....
I shot two films that afternoon before heading back home it was a fantastic day even though nearly rained off but I got the photos... The photos are below and you will see the changes between my photos and Hardmans - more over grown trees and the landscape has grown too plus you'll notice the houses.
Your feedback is most welcome.  The images are shot with a Box Brownie Reflex from the 1940's. 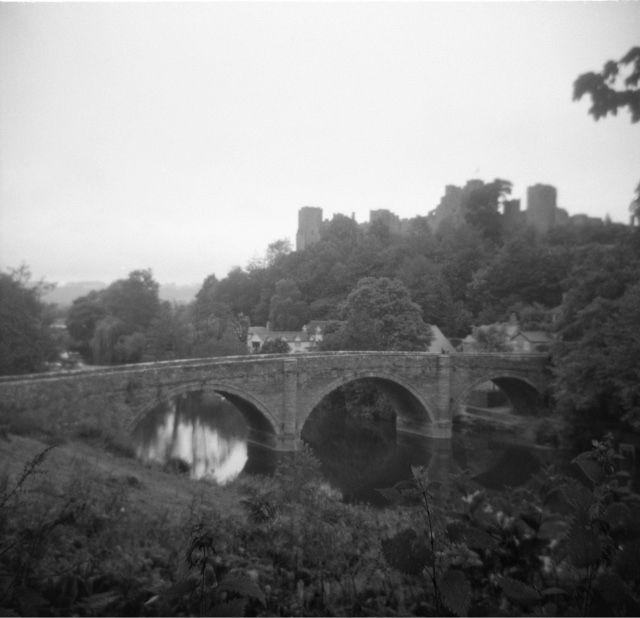 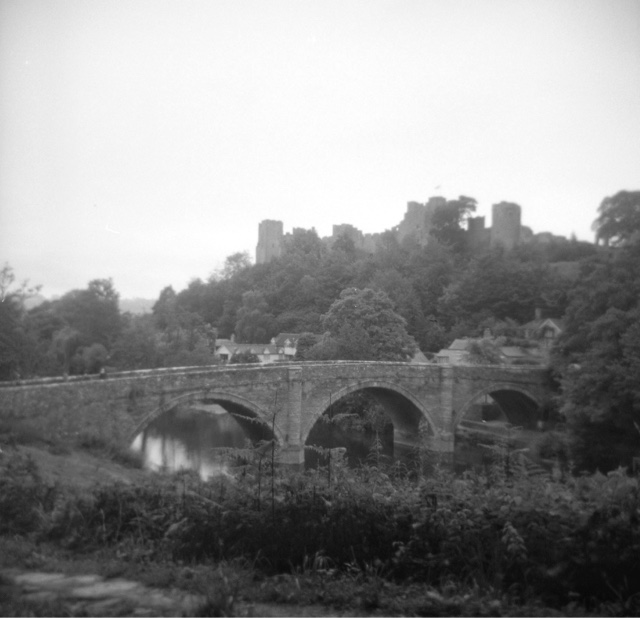 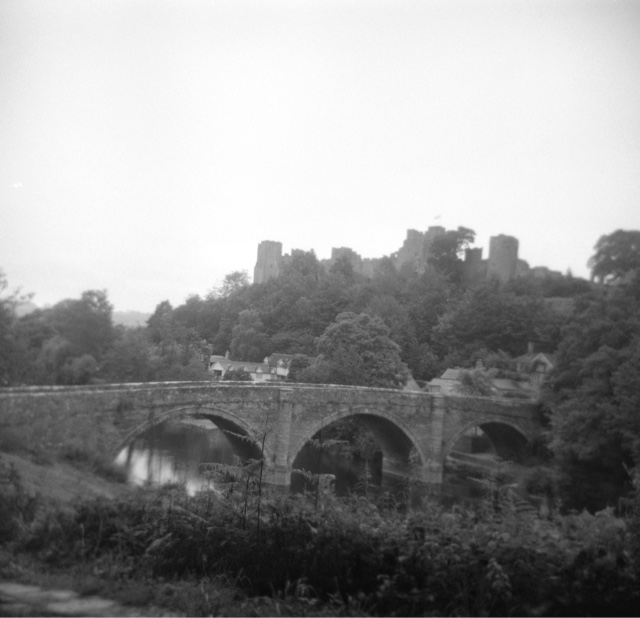 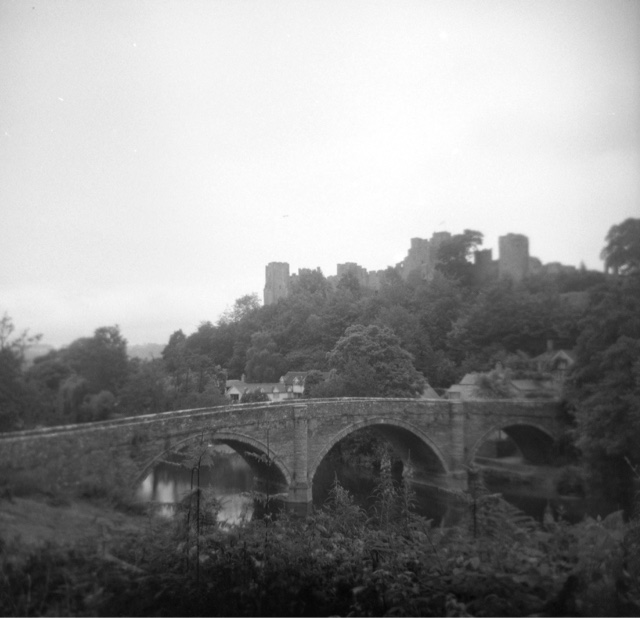 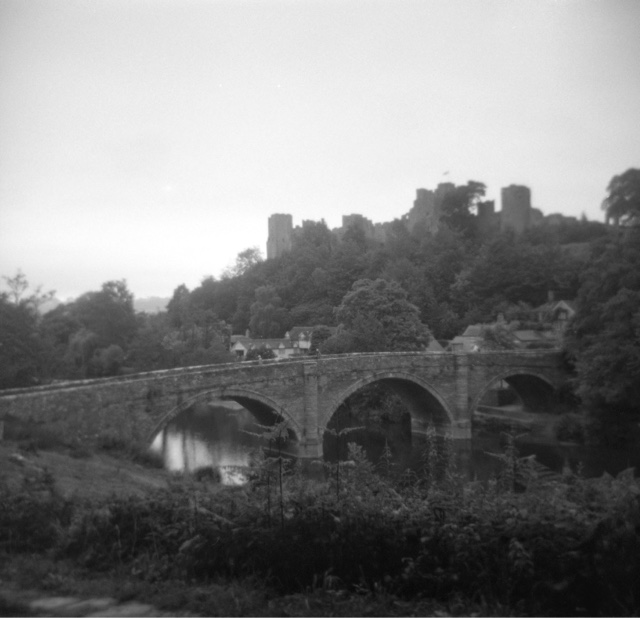