This morning was our first lecture on the History and Theory of photojournalism and documentary.
As the class began we waited patiently for the others to log onto the classroom.

Suddenly our first lecture was underway.  I felt a bit lost in the process as I struggled to follow mainly due to my hearing difficulties as normally it's better if I see the person face to face when talking but this isn't the case in class as it's all done online audio only with a blackboard in which things are shown on that board for us to examine or give input to.

I will press on and as I don't let things like this get in the way of what I'm doing I find other ways around it.  I was so curious as to what happened at the beginning as I saw that Paul was asking the others questions so I quickly messaged Tom to ask what was going on he kindly replied so that helped massively.

We were looking at different photos and trying to make meaning of them like we took them apart to make sense of what the story was within the photos.  It was fantastic really.  Other things were Dr Paul Lowe would draw a circle around a photo on the blackboard and ask us "how does that change the image?"  Was interesting really and in one sense sort of brought us closer to what we really saw, it makes you stop and de-construct the photo which is a great method as we did this in our critical studies while I undertook my BA at Blackpool.  It is a valuable tool to have I believe.

I will throw up some screen shots I took to explain things in more detail. 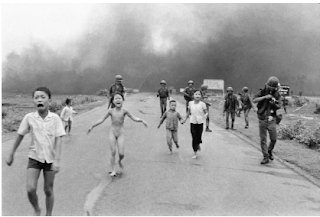 We started off by looking at this image which most of us are familiar with it's very powerful and they're running for their lives the fear can be seen in the faces it's awful really and pure horror.  Yet when we look at the Photographer on the right he seems not really with what is going on, looks like he is preoccupied with reloading his camera maybe I'm not sure.  Dr Lowe then did this to the image and asked up what do we see differently? 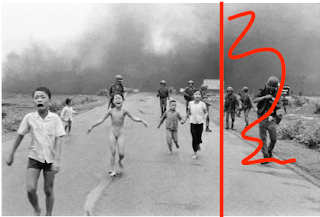 It took on a whole new dimension one could see more clearly what was going on its like your eye is drawn towards the girl running naked for her life.  Yet the first image you saw everything the full picture.

We then moved on to look at another image see below 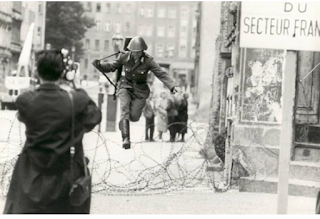 we spent a few moments looking at this image from what I saw if you look at the soldier you wonder what is going on then look at the people in the background I immediately though this a staged photo it's set up maybe they were making a film as you can see the camera man.

Then Dr Lowe got us to look at the first photo of those children running and compare it to this one for myself the first image is a real life event where as the second one isn't.   Well the second image could be a true life event but being acted out for a film?

The next image we look at was 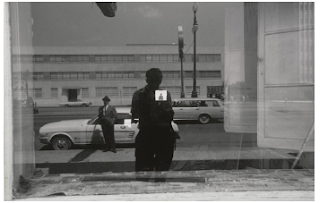 Such a different thing altogether we jumped around while looking at this photo it was like a huge debate going on in the class as we all gave our own input it was interesting to see what others saw within this image absolutely fantastic.  This image was taken in New Orleans in 1968 we all even debated which year it was shot due to the background and the car I thought the 50's but nope was wrong.   It was a real learning curve.
My next blog will be on the final photos on "People At Work".