Just last week I traveled over to Birkenhead in Liverpool to capture where Hardman took his most iconic photo of the Ark Royal.
When I arrived in Liverpool City I jumped on the tube which took me to Green Lane when I got off the tube suddenly I realised they were doing work on that station so I had no-one to assist with directions so quickly one grabs their phone to Google maps....I found the steep path leading to Holt Hill slowly I began the climb dare I say.  I was in my element walking up that path as knowing what I would see when I got to the top.

At the top of the hill it was like an island in the middle of the road this is where Hardman stood all those years ago, I don't think it was an island then!  I began snapping away to my hearts content, suddenly I heard a man shouting so I looked up at the apartments on my right and sure enough the man asked what was I doing so I shouted back but he couldn't understand me...maybe my Scottish accent.
This is the first photo I took with my phone. It's looking towards where Hardman took his most iconic photo in the 50's.
Looking towards where the Ark Royal once stood. 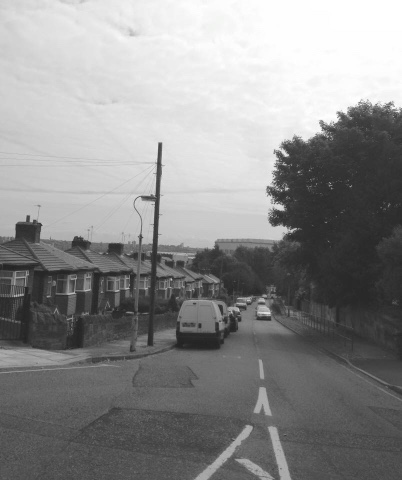 Then I got my Brownie out and began to take more photos unaware that the man was still watching from the balcony, he shouted again asking what camera I was holding, he seemed genuinely interested so I told him.  About twenty minutes passed he shouted down you should see the view from up here you can see all of the River Mersey and offered if I wanted to go up and take some photos.
Normally I like to work quickly and quietly so I can concentrate but with someone shouting back and forward is a huge distraction.  So I continued to take the photos. 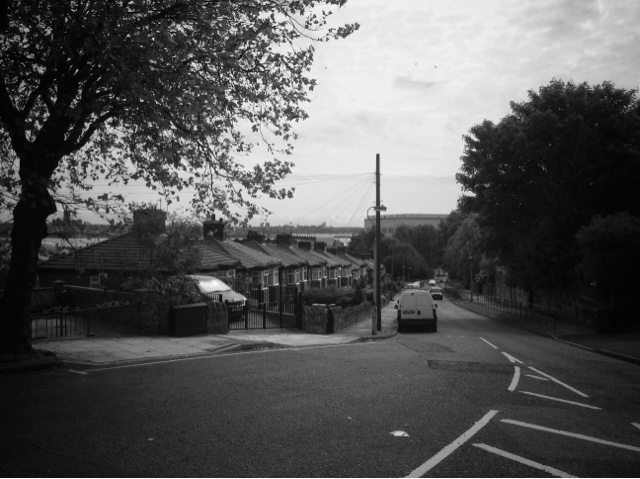 The above was shot with my Nikon I now await on the photos from the Brownie.
Suddenly I accepted this mans offer to go up and see the view but was very cautious because I don't know the area and if it was safe to do so, I had my wits about me if you know what I mean...true to what I saw when I was standing looking down across the river from the balcony it was beautiful.  This man was genuinely interested in what I was doing...His living conditions said a lot about him I wished I had spare time to question him about his life as everyone has a story and I would have liked to have photographed him in his surroundings as it would have been a great start to a documentary project.
The view this is what I saw... 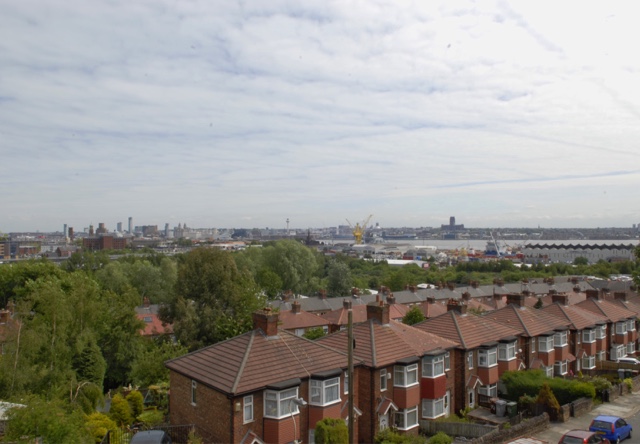 It was lovely standing there looking down and the view across the river was beautiful indeed.
I then moved on to catch the ferry across the Mersey as Hardman captured some school kids on the ferry I walked to Hamilton Square it was a nice day so the walk was good, upon arrival at the ferry terminal there were lots of people waiting to get the ferry also I guess a mix of holiday makers alongside families and local people quite a mix but no school kids.  I will take the ride again at some point.  I kinda got a bit lost in the ferry ride as I just snapped away at everything really but I feel maybe the 50 minute tour would be ideal for the next time.  The ride was a lovely adventure although short. 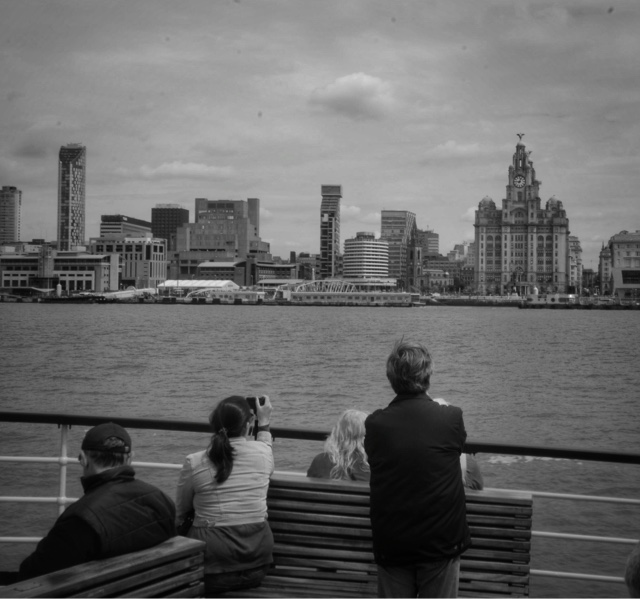 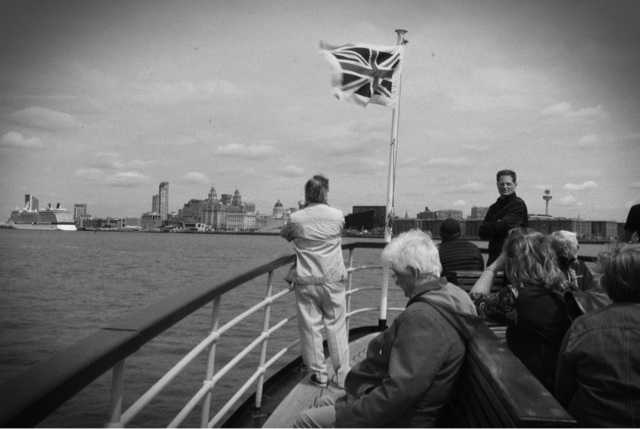 Below is the photo Hardman took on the ferry with the school kids...one can clearly see the ferry has changed so much since then...but the ride was lovely.... You can also see how much the city has changed too by comparing the photos. 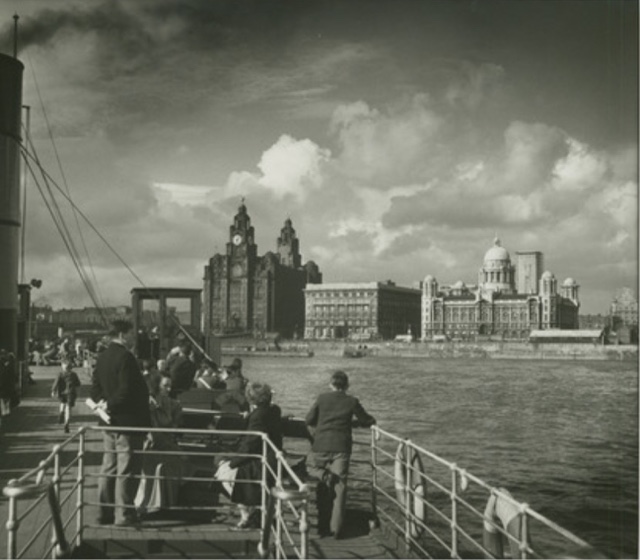 As we got closer I had to move quickly but had no time to compare with Hardman's photos as the ferry seemed well seemed to move faster than I anticipated... 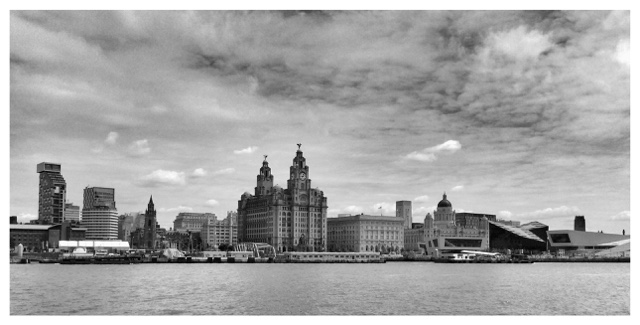 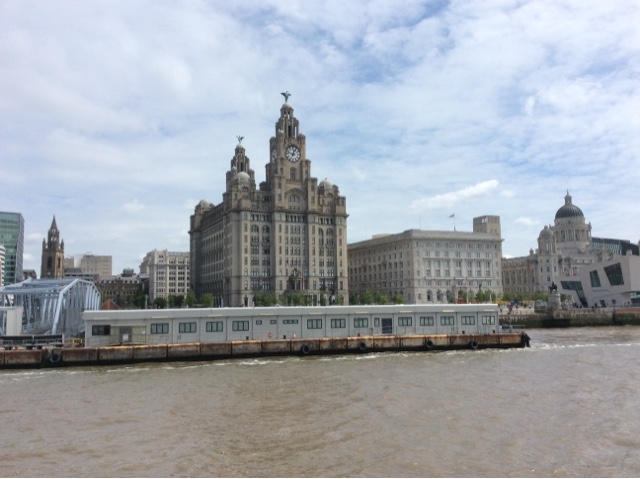 My next place was to find what was called The Museum of Liverpool for some of you will know they have this fabulous new building which is the museum today not in Hardmans time.  So after some thought and research I began the walk towards the World Museum in Liverpool.  With a map in my hand and carrying all my camera gear it was heavy thankfully it wasn't too hot weather wise...the walk was interesting as it was a part of the city I'd never been too.  But it was nice as I walked along quite happily wondering what the next view would be like compared to when Hardman photographed from the museum steps.  As he captured this on a rainy day in the evening as the city lights were on and the paths reflected the lights due to the rain.  Whereas for myself it was a sunny day and dry as well and mid afternoon too.
The World Museum is very grand and such a beautiful building indeed. 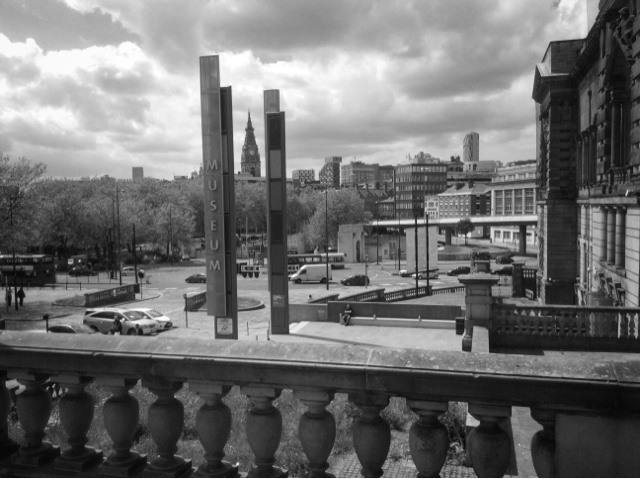 The above is one of the photos that I took with my Nikon but at the same time I was trying to get it accurate as to when Hardman shot it, but I realised afterwards later when I got home it wasn't spot on.  But as I looked closely at the photo Hardman took and mine their was no way I could get to the same spot because it was chained up the gate leading to where he stood.  One feels the need to contact the World Museum to see if they would allow me to have access to the same spot on another visit.
Below is the photo Hardman took looking from the museum. 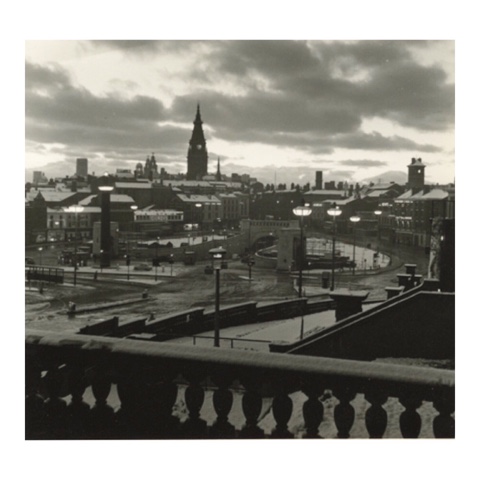 After taking those photos I then went on to explore and find a statue that he also photographed nearby the museum... Below is my shot beside his it's not spot on again.  I guess a learning curve. 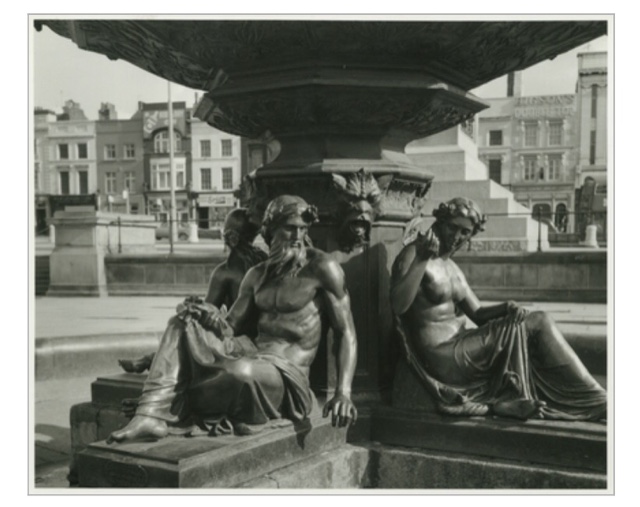 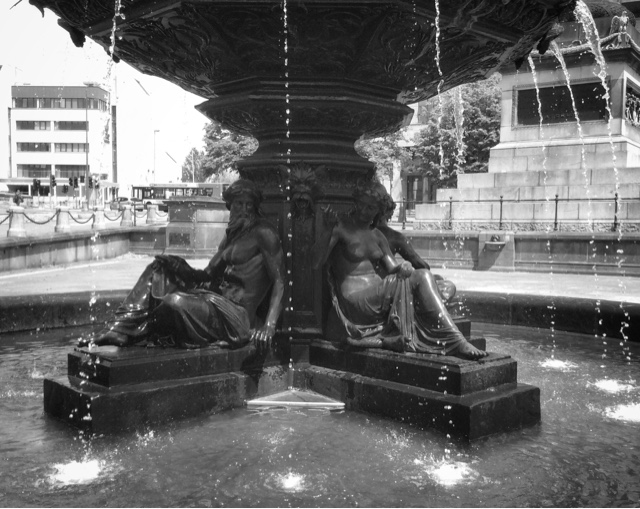 Just last week I was invited to an end of the year Graduate Show by some students and Staff from my former University.  I traveled over to Manchester to see this show as I heard it was outstanding and seeing one was in the exhibition mode I decided to go along and see the new emerging talent to see what is coming out from the creatives in the North West.
As I arrived at the Old Granada Studios it seemed surreal to be outside this building which once was responsible for many TV shows being broadcasted here in the UK.
The exhibition was true to what was expected it was fantastic.  It was a one night show only for various reasons, it quickly filled up and at 7:30pm they had a fashion show which was just amazing to see the new talent.  I have to say one is glad that I made the effort to go along.
While chatting with different people at the show someone remembered who I was from a previous exhibition where my work was shown and they referred to me as the "Brownie Girl".
I found that most encouraging to be honest because I want people to notice what I'm doing as I walk with my Brownie camera.
Some of you already know that I've begun a project walking in the footsteps of Edward Chambre Hardman, retracing his steps today.  Just the other week I went up to Sedburgh to photograph a school he was commissioned to photograph in the 1950's.
When I got there the feeling I had inside was immense I can't put words to how I really felt it was good.
To stand where he stood it seems like I'm talking about someone famous but no he was a very down to earth photographer.
I began to take photos of which I thought was the school he was commissioned to photograph in the 1950's but upon getting back home suddenly realised that I captured the wrong building as there are many different buildings that belong to the one school.  A friend suggested that I try to line the photos up the old and new to make sure I get the images accurate. One tries their best so.
You will see from the photos what was going on. 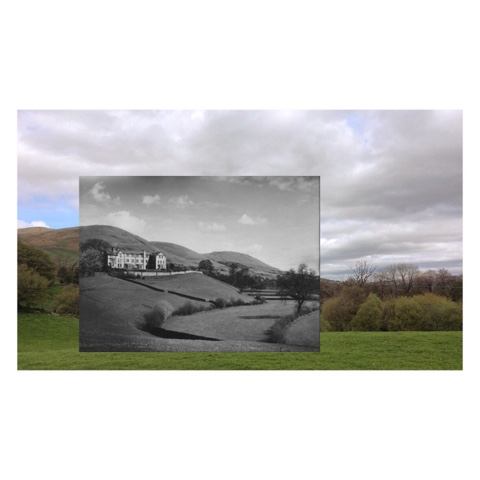 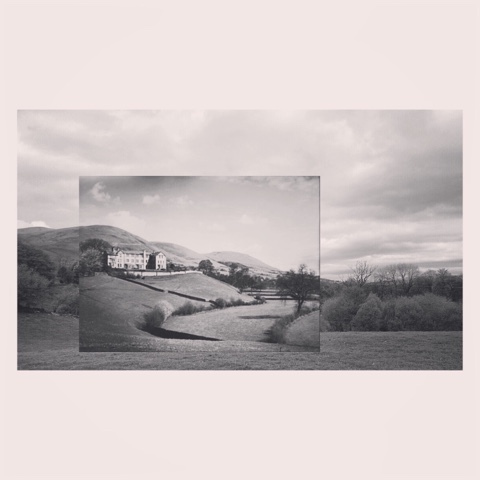 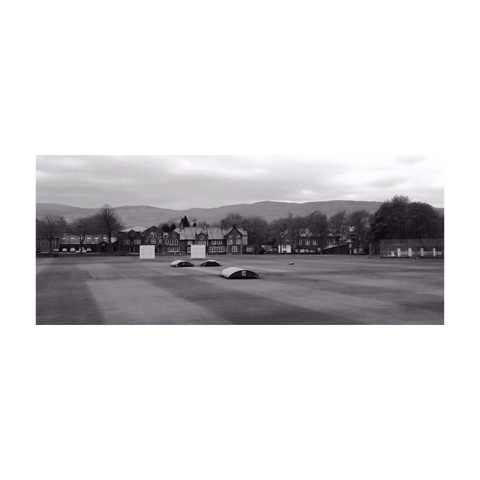 The above is the wrong building to my dismay.....it's so easy to make such mistakes dare I say that! 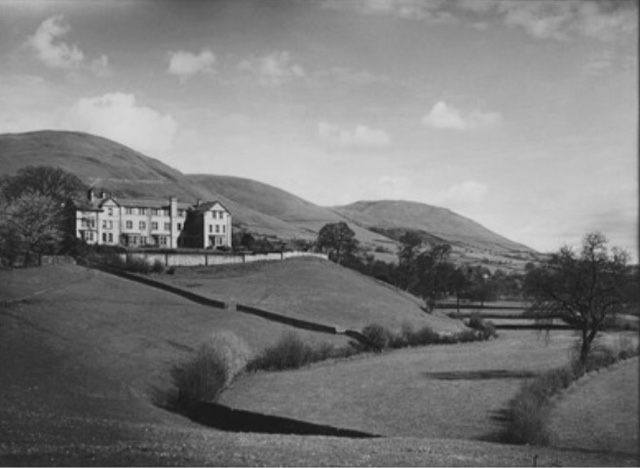 One can see how I lined the photos up together all I could focus on we're the three sloping hills in the background I knew if I got that right without the need of anything else, how wrong I was... So I contacted the School in Sedburgh and asked for help locating where Hardman took the photos.  They kindly gave me details as to the exact building and place.
Off I went to sedburgh again to find the correct building and location too, yes I found it, below is one of the photos I captured with my Brownie Reflex. 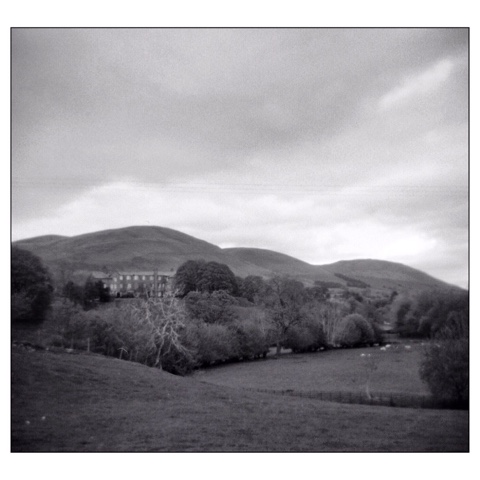