After receiving the go ahead from my tutor for the practical project I simply couldn't wait to get started.  I made contact with people and it seemed to be going in the right direction and things were falling into place as well.  It seemed exciting and daunting too.  An unknown territory to many as I think back to those early days with the project dreaming of possibilities as well.

It was Monday morning my camera was charged up and I was ready.

My practical project was to be a story of my life as a profoundly deaf person but I wanted to tell my story through someone else.  I never dared to do it on self no, it had to be someone else.
I began to photograph Rich at his workplace but something was nagging at me that day I felt that I wasn't really getting those images that I dreamt of, how I had it all planned somehow I thought I'm just not sure.  Then I pushed it aside thinking give it time, it's only the first shoot.

Below are some of the photos I took that day while he was at work he is a skilled wood carver and he does signs made to order.  Quite a skilled job, he is making signage for a garden. 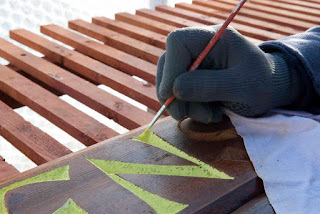 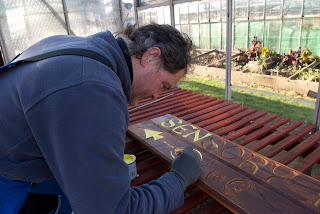 Having spent that morning with Rich it was inspiring to see what he actually does for a day job, he is a normal person like everyone else yet needs to work and that's what he does.  He is also involved in a  local deaf drama group which works closely with The Dukes Theatre in Lancaster.  They had a play recently I was unable to attend due to family matters.  I do believe it was very successful.

A few days after taking these photos well I took lots but will only show these two as they seem fitting for sharing what I'm talking about.  A few days later it was time for our fortnightly tutorial with Leonie who looks at our work and gives us a critic which I find very helpful indeed.

I shared with Leonie my vision and what I wanted to do plus the photos that I had taken of Rich she looked through them and she heard me say it was a project of my story but I didn't want to do it on self so chose someone else.  Leonie gently asked why don't you turn it around to self?  Don't feel ashamed or intimidated you should think of doing it on self as you talk about your story...  I did share with Leonie at that time I wasn't sure that I was going to get what I wanted as Rich and myself are two different people so its really different stories.  I just wanted to tell my story but wasn't sure of doing it on myself as I'm a private person.

So I left that tutorial thinking about what was discussed and wanted to think through things more clearly.

As I began to think about it really in my mind yes it seemed right to turn it around to self and just tell my story as it is and to invite people into my world.

A few days later my world came crashing down unexpectedly.   My best friend was simply told that her cancer had returned and it was terminal.  All these thoughts and emotions ran through me to think her  life was slipping away before my eyes it was unbearable to think like that yet it was reality and it was happening.  I couldn't face anything I was just struggling to come to terms with what I just heard and to know how frightened she was at that time it made shivers run down my spine.  I was broken and it was tough to cope with.